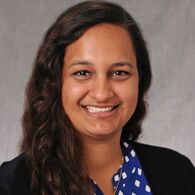 Avani R. Raythatha, MD
​
Avani R. Raythatha was born and raised in Houston, Texas. She attended the University of Texas at Austin and then went on to study medicine at Baylor College of Medicine. Avani is currently a third-year resident in Obstetrics and Gynecology at GW. She became interested in health policy as an intern while attending ACOG's Congressional Leadership Conference. After graduation, Avani is planning to pursue a career as an academic generalist.
​
Back to Current Fellows