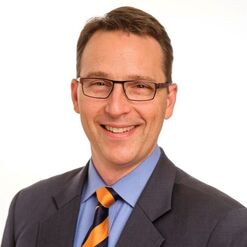 Robert Phillips is a graduate of the Missouri University of Science and Technology and the University of
Florida College of Medicine where he graduated with honors for special distinction. He completed training in
family medicine at the University of Missouri in 1998, followed by a two-year fellowship in health services
research and public health. After fellowship, Dr. Phillips became assistant director of the Robert Graham
Center, Washington DC, and from 2004-2012, he served as its Director. In 2012, he moved to the American
Board of Family Medicine (ABFM) as Vice President for Research and Policy where he led the launch of a
national clinical registry. Dr. Phillips currently practices part-time in a community-based residency program in Fairfax, VA, and is Professor of Family Medicine at Georgetown University and Virginia Commonwealth University. He served on the American Medical Association’s Council on Medical Education and as president of the National Residency Matching Program. From 2006-10, he was vice chair of the US Council on Graduate Medical Education, and from 2015-2019 he served on the National Committee for Vital and Health Statistics as co-chair of Population Health. Dr. Phillips currently serves as co-chair of the National Academy of Science, Engineering, and Medicine consensus study on Implementing High-Quality Primary Care. He served as a Fulbright Specialist to the Netherlands in 2012 and New Zealand in 2016. A nationally recognized leader on primary care policy and health care reform, Dr. Phillips was elected to the National Academy of Medicine in 2010 and currently chairs the NAM Membership Committee. In 2018, Dr. Phillips was named the founding Executive Director of the Center for Professionalism and Value in Health Care.
Back to Speakers