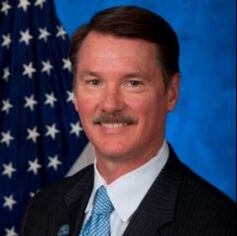 Gerard R. Cox, MD, MHA was appointed Assistant Deputy Undersecretary for Health for Integrity in March 2016.  In that role he provides executive leadership to a broad range of oversight and compliance activities at the national level, including the Office of Compliance and Business Integrity, the Office of the Medical Inspector, the Office of Internal Audit and Risk Assessment, the Management Review Service, and the National Center for Ethics in Health Care.
A seasoned physician executive and an Afghanistan and Gulf War Veteran, Dr. Cox joined the Department of Veterans Affairs in January 2014 after more than 30 years as a U.S. Navy medical officer.  Originally appointed as Assistant Deputy Under Secretary for Health for Policy and Services, he has served since July 2014 as the Interim Director of the Office of the Medical Inspector, where he led the restructuring of that office to establish a more effective, VA-wide investigative function in response to whistleblower concerns.  During his military career, Dr. Cox performed a series of hospital leadership roles with increasingly complex management responsibilities, including service chief, service line leader, chief operating officer, and chief executive officer.  He also held executive positions on the staffs of the Navy Surgeon General, the Commandant of the Marine Corps, the Commander of U.S. Navy forces in the Middle East, and the Naval Inspector General, and served as a White House physician in the administrations of Presidents William J. Clinton and George W. Bush.
Dr. Cox completed a medical internship at the National Naval Medical Center and the combined residency program in emergency medicine at Georgetown University, George Washington University, and the University of Maryland.  He is board-certified in emergency medicine, occupational medicine, and health care administration and is a Fellow of the American College of Emergency Physicians, the American College of Preventive Medicine, and the American College of Healthcare Executives.  Dr. Cox was elected to membership in the Alpha Omega Alpha Medical Honor Society and the Delta Omega Public Health Honor Society.  His military decorations include the Legion of Merit Medal (3 awards), Defense Meritorious Service Medal, Meritorious Service Medal (5 awards), Navy and Marine Corps Commendation Medal (3 awards), Navy and Marine Corps Achievement Medal, and the Presidential Service Badge.
Back to Speakers